Fortune and luck didn’t come to play for Sunshine Stars FC of Akure yesterday on matchday 18 of the NPFL, losing yet again by a slim margin; 1-0 against Rivers United in Port Harcourt, Sunday.

SUNSHINETRUTH gathered that the result left the Akure team with 18 points from 18 league matches and dropped to the relegation zone (17th position on the NPFL table. 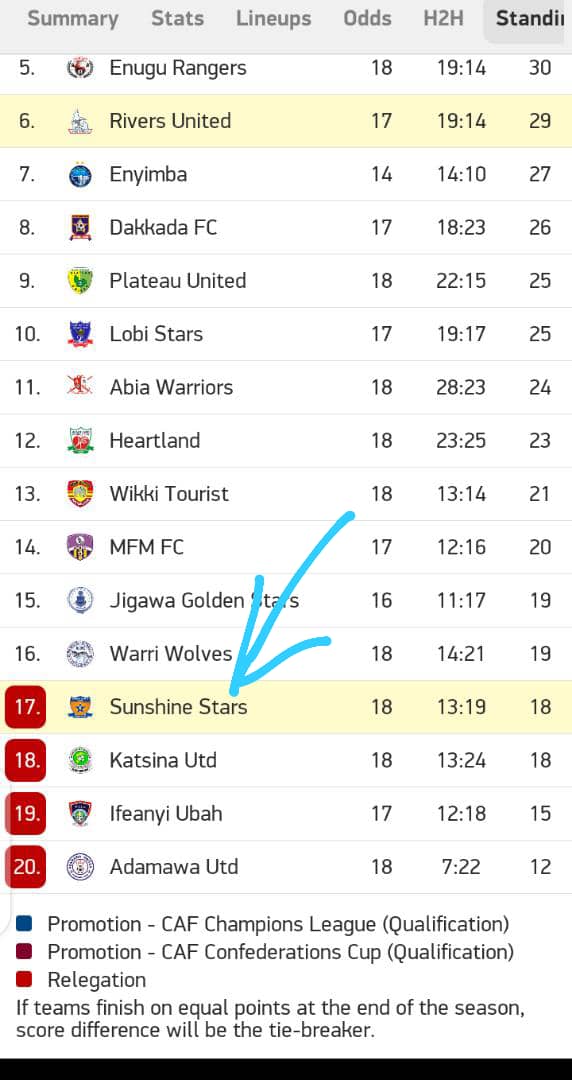 Determined to put an end to the haunting run of form, it was Sunshine Stars attackers versus the Rivers United gaolkeeper from the blast of the whistle.

Waheed Adebayo was the first to try from a loose ball in the 5th minute, but Ospini Egbe denied the winger while the goalkeeper’s luck prevented Sadeeq Yusuf from scoring while blocking a clearance in the 16th minute.

In the 26th minute, Egbe denied Adebayo again, before Godwin Aguda found a way past Uche Okafor to give the hosts the lead few minutes past the half hour mark.

Two minutes before halftime, Yusuf went down under a challenge in the box, but the penalty appeal didnt move the refree as Rivers United lead into the break.

The second half became more frenetic with chances at both ends of the pitch.

Okafor was the first to be called into action in the 55th minute, before Egbe prevented Yusuf from tapping home in the 75th minute.

Two minutes later, Okafor made another point blank save to keep Sunshine Stars in the game.

As the clock ticked, Sunshine Stars didn’t back down in the search for an equalizer as they piled up the pressure on the Pride of Rivers in a late push.

And the Owena Whales carved Rivers United open in the 89th minute again, only for Chinedu Udechukwu to be tripped inside the box, but the penalty appeal again, did not move the referee as the contest ended 1-0 in favour of United.

Coach Gbenga Ogunbote: “the game has been playes; won and lost and we take positive from it, but the issue is we need development in the game; you as an independent observer don’t need to ask some questions but just report what you have seen.

“We have our challenges and some times it happens like this to clubs all over the world and we know why we are where we are and I know the owners of the team will need to do the needful to get it right.”

Captain Abe: “we have our challenges but we want the referees to try their best and do the right thing during game. I am not the type of captian that complain about referee, but no sense in it when you prepare all week for a game to be affected by referee._

“If you check our past eight games you will know what I am saying. I am not here to attack anybody, just an appeal for them to do the right thing so our league can improve.”